Cosplay is a performance art where participants dress up and roleplay as specific characters from works of fiction. The most common sources that cosplayers draw from are movies, TV series, books, comics, video games, cartoons, anime, or manga. Derived from the Japanese word コスプレ (kosupure), ‘cosplay’ is a portmanteau of the words “costume play.”

It is also something that I did for the first time at New York Comic Con last week. 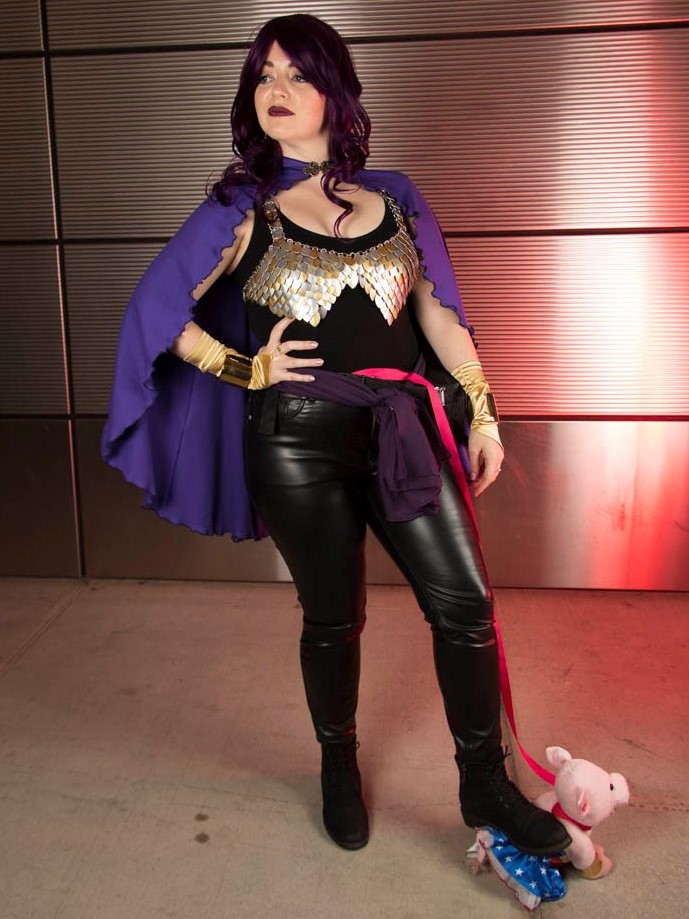 “She was Circe. And she would not be trifled with.”

When I told people that I was going to New York Comic Con for my birthday, one of the first questions I’d be asked is, “Are you dressing up?” At first, I wasn’t sure. I have ‘bounded’ —dressed in regular clothes inspired by a character—at cons before, but I never did a full-out cosplay. I was bouncing ideas off of Elie (who is a cosplayer herself) as I am wont to do, when she asks, “Why don’t you cosplay Circe?”

Circe is a character from DC Comics. Based on the Greek mythological figure of the same name, she is a legendary immortal sorceress and recurring enemy of Wonder Woman. She is extremely powerful and has a penchant for turning people into animals, as well as a vast knowledge of potions, herbs, and illusions.

Elie and I discussed how I was Circe a year and a half ago when I was selecting ten characters from either DC or Marvel that I felt I could portray or identify with. One of the main reasons behind this choice was inspired by Justice League Unlimited season 1 episode 5, ‘This Little Piggy’:

“Circe turns Wonder Woman into a pig and only agrees to turn her back after Batman croons 'Am I Blue' at her jazz club. It doesn't get more Jacki than that.” — Elie Thawn

So, when Elie mentioned me cosplaying as Circe, I was immediately intrigued by the idea. I wondered, “Should I go all out?”

Her response was simple: “Yes. Absolutely.”

Well OK then. Why not give it a shot?

Once I decided that I was going to cosplay as DC Comics Circe, I needed to pick which of her several outfits to recreate. I ultimately was inspired by her armored look from the 2000s and the DC Universe Online and DC Unchained games. For her hair, makeup, and accessories, I also drew from ‘This Little Piggy’.

Three of the key pieces to my ensemble are the armored top, the cape, and the wig. For the first two of these pieces, I went on Etsy and had a Custom Scale Mail Bikini Top made by VinylDragonShop and a Druid Lily Capelet made by technodolly. The wig is from Arda Wigs—thank you for the rec, @LaraLunardi!

The final, crucial piece that I had to try to incorporate was ‘Wonder Pig’ which would not only elevate the cosplay, but would also make the character more recognizable.

In my search for a suitable Wonder Pig, I decided to check what Build-A-Bear had to offer. Luck was on my side: they had both a pig and a Wonder Woman costume! I didn’t hesitate to buy.

One of the most important pieces of character-related creative wisdom I ever received was a quote by Christopher Vogler: “From [their] point of view, a villain is the hero of [their] own myth.” I developed my Circe with this in mind.

Cosplayers sometimes choose to act the part, taking on the personality of the figure they've worked so hard to physically portray. Because Circe embodies so many of my own qualities, I wanted to do a deep dive into her history and psyche and incorporate those elements into my characterization. I had a general knowledge of who she is thanks to Elie, The Odyssey, and ‘This Little Piggy,' but I decided to do some additional research:

While doing all of this, the first thing I realized was this: Elie was right (Elie: “I’m always right.”). I could definitely see why I was Circe. There were several instances where I had an “OMG that’s so me” or an “I can totally see myself saying/doing that” moment. This is my Circe:

Circe is a symbol of women’s empowerment; more specifically, of male anxieties surrounding female power. In Wonder Woman: The Witch and the Warrior, she turns all male heroes into beasts, causing the female superheroes to unite in order to defeat her and her team. In Wonder Woman: Who is Wonder Woman? she steals WW’s powers, which she uses to avenge wronged women. She kills several slave traders and frees thousands of trafficking victims. Circe is complex and underappreciated. She is charismatic, and while she can overpower people with strength, she usually chooses to exploit their wants and emotions, because she’s not in the villain game for the power, she’s in it for the entertainment and sometimes for the sweet revenge. Circe is also a theatrical character and is usually portrayed by divas like Bernadette Peters (The Odyssey miniseries), Idina Menzel (Disney Hercules TV series), and Rachel York (‘This Little Piggy’).

Elie provides further insight into how Circe and I are similar:

‘What distinguishes Circe as a villain would distinguish you as one from the rest of us: theatrical villainy for funsies. She is also merciful despite having phenomenal cosmic power, which is a very Jacki quality. Circe’s also a bigass Hufflepuff on a rampage.’

“You’ll have to forgive the theatrics. I’m a few thousand years old and I do enjoy the camp of the superhero game quite a bit. The silly outfits, the punching… it keeps things from getting tedious.”

Before I knew it, NYCC was here. It is a four-day event, and I planned to cosplay on Saturday. Friday night, as I lay in bed trying to fall asleep, I felt “pre-performance jitters.” I started second-guessing whether my cosplay was good enough, whether people would recognize me, etc. Elie helped calm my nerves, reminding me that the other cosplayers were likely feeling the same way and would be too preoccupied to judge me.

I completely settled on Saturday morning as I was doing my makeup with JLU playing on my TV in the background. I was going to have a good time. This was for me, not for anyone else. And if they didn’t recognize me, so what? I would simply educate them on who Circe is and why she’s a badass.

As far as I saw, I was the only Circe at NYCC this year. Since I had purple hair and a purple cape, many people thought I was Raven from Teen Titans. But despite my earlier worries, there were people who recognized me and liked my cosplay! Several attendees asked to take pictures of me or with me, and I got to shoot with some great photographers like @ryanlahiff and @ericphotonow. I also approached various people to take photos with them.

Wonder Pig was an excellent conversation starter. The highlight of my day was when one guy saw me, pointed, yelled “She has Wonder Pig!” and ran over to take a picture with me. Unfortunately, the photos were only on his phone so I can’t share them. I have learned my lesson: I need to remember that Airdrop is a thing that exists and to ask for the photo from now on!

Something that surprised me was that when cosplaying, time seems to pass more quickly. There were several instances when I checked the time and thought, “Oops, that panel I wanted to get to started over 20 minutes ago.” Taking pictures takes a significant amount of time, and you can’t walk around as fast as you normally would in case it knocks something askew. It’s something that I will keep in mind at future cons.

I had such a good time on Saturday that I went as Circe on Sunday as well. By the end of the convention,I was completely exhausted. I got into bed around 7pm that night, very happy with my first cosplaying experience. I plan to keep Circe as one of my ‘signatures’ for any future events.

The Field Guide to Evil: A Night with Legion M

A New Type of Oscar Ballot